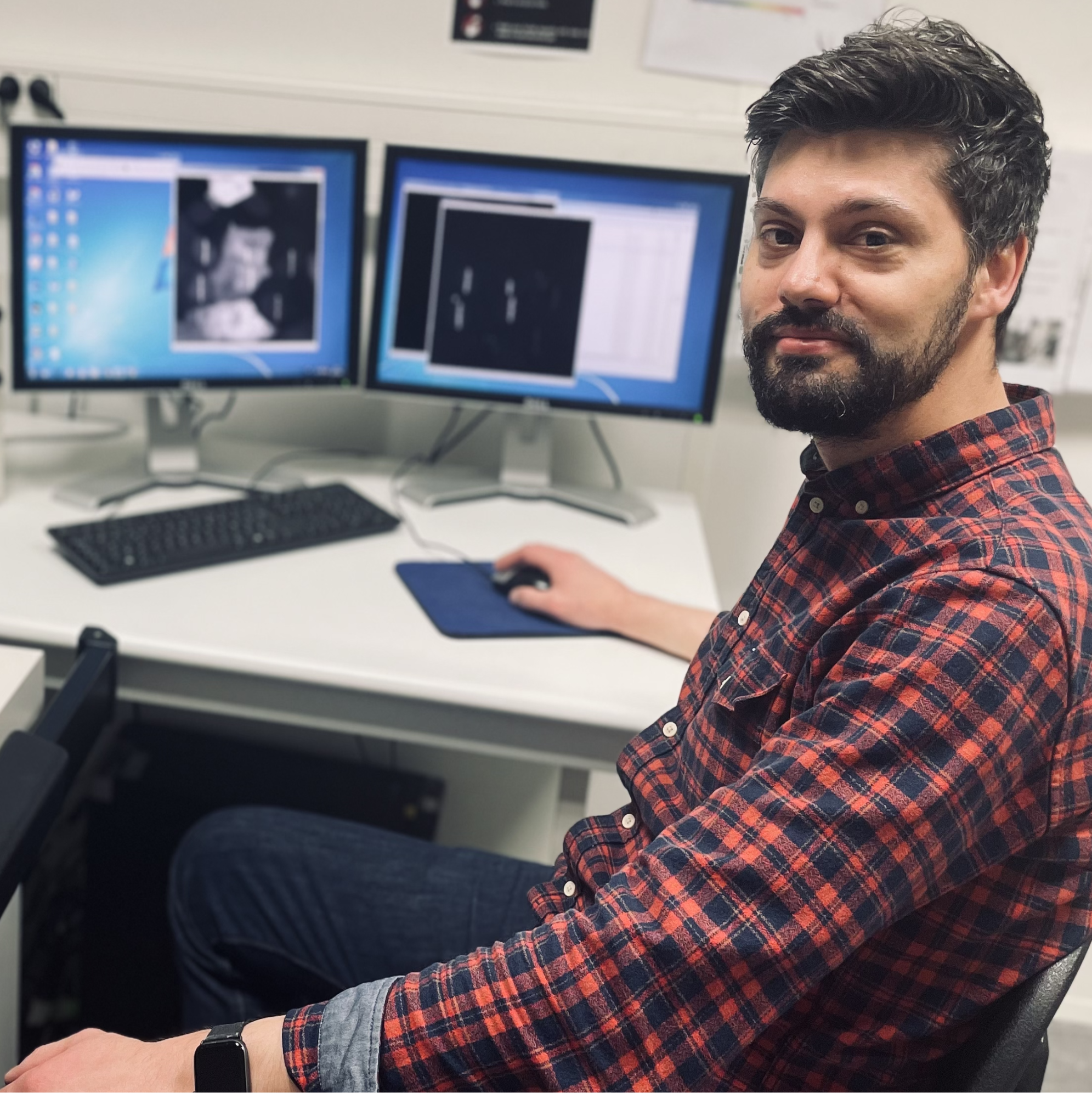 Dr Nicolas Bigot is a biologist. He is working on the 53BP1 protein, which has an important role in DNA repair.  He started the FARIDDAS project within the SPARTE team at the IGDR, University de Rennes 1.

[Team BIENVENÜE] Hello Nicolas, how did you come to work on DNA repair?

[Dr. Nicolas Bigot] During my PhD at the University of Caen, I first became interested in inflammation and cellular ageing. This phenomenon, also known as senescence, is often characterised by defects in DNA repair and by the accumulation of DNA damage. It is a mechanism that prevents the transformation of cells into tumour cells.

In order to learn more about these mechanisms of senescence and DNA repair, I did a first postdoctoral fellowship at U1236 at the University of Rennes 1, which focused on the evaluation of genomic stability and senescence of bone marrow stem cells. Afterwards, I continued to work on DNA repair and the 53BP1 protein in England. The 53BP1 protein is an essential protein for signalling the most toxic DNA breaks, which if not repaired properly lead to mutations that can trigger tumorigenesis. This protein acts as a kind of team leader, controlling the formation of a scaffold around the breaks, which ensures the recruitment of other proteins that can repair the DNA eventually.

The 53BP1 protein works in opposition to another protein called BRCA1, which participates in the phenomenon of homologous recombination whereby perfect repair is achieved, but only when specific conditions at the cellular level are fulfilled. Thus, 53BP1 acts as a guard for BRCA1 and prevents it from overriding its functions, when these conditions are not encountered, and vice versa. Both are important for DNA damage signalling and repair, but each ensures that the other respects its place and performs its own role depending on the cellular context.

This is an important concept, which has led to new therapeutic strategies. If the BRCA1 protein is hereditarily inactive in a patient or just in a tumour, then it is possible to use a drug that leads to the formation of DNA breaks specifically at the time when BRCA1 is most likely to play its most important role. With BRCA1 effectively inactive, in this patient or in this tumour, 53BP1 will override its role, take the place of BRCA1, but will not be able to trigger DNA repair as faithfully as BRCA1 would have done in this very specific context, resulting in the death of the tumour cell due to a failure to adequately repair its DNA.

In particular, PARP inhibitors are molecules capable of inducing the emergence of breaks at the time when BRCA1 would be most able to repair perfectly, as mentioned above. However, with the multiplication of studies, we have noticed the emergence of cases of resistance to these PARP inhibitors, in the sense that the expected effect was not achieved. It was this phenomenon that gave me the idea of looking at whether these inhibitors did not modify the activity of 53BP1 as well, thus rendering the therapeutic strategy explained before obsolete.

What will you work on during the FARIDDAS project?

We will assess the activity of 53BP1 in DNA damage signalling when cells are treated with PARP inhibitors. PARP is an essential protein that changes the cellular context around it when breaks occur. Thus, we suspect that PARP also modifies 53BP1 on a few amino acids and we want to see if 53BP1, when no longer modified, still plays its role or not. More clearly, are the phenomena of resistance to treatment with PARP inhibitors linked to these changes in 53BP1 or not?

In order to do this, I will work with microscopy methods that allow us to observe the effect of these treatments on 535BP1 in real time on living cells. Indeed, we are able to precisely break the DNA and observe how the recruitment of 53BP1 occurs, i.e. whether it is faster, delayed, stronger or weaker, etc. Likewise, the areas of 53BP1 that we suspect are modified by PARPs will be precisely mutated. So, if these mutations result in a change in the response of 53BP1 in the presence of these inhibitors, then we will have some mapping of 53BP1 and will be able to tell whether a patient or a cell displaying this change in 53BP1 may respond favourably or not to treatment with PARP inhibitors.

At the end of the project, I hope to be able to better evaluate the kinetics of the proteins, the impact of PARP on the 53BP1 protein. I also hope to understand the evolution and impact of these elements according to the time of the cell’s life cycle.

Why did you choose to carry out the FARRIDAS project in this laboratory?

I first wanted to come back to work in Brittany, and deepen my research on 53BP1. It seemed obvious to me to collaborate with my current supervisor, Sébastien Huet, because he is a specialist in PARP, its role in DNA repair phenomena and in the microscopy techniques that enable it to be observed. In return, I bring my expertise on the 53BP1 protein and its associated proteins.

Finally, here, I have access to the necessary “ready-to-use” material, notably with numerous cell lines, a thousand DNA constructs… This allows me to carry out experiments on different cell types, to specifically observe certain proteins with certain mutations, and to confirm my hypotheses more easily.

Do you have a recommendation for a reader who wants to know more about the subject?

I can suggest the book “The Black Box of Biology: A History of the Molecular Revolution” by Michel Morange. This book emphasizes the impact of molecular biology on scientific discoveries in biology over the last half century. Moreover, you are welcome to come to the lab or to contact us. Researchers always appreciate sharing and discussing their research.