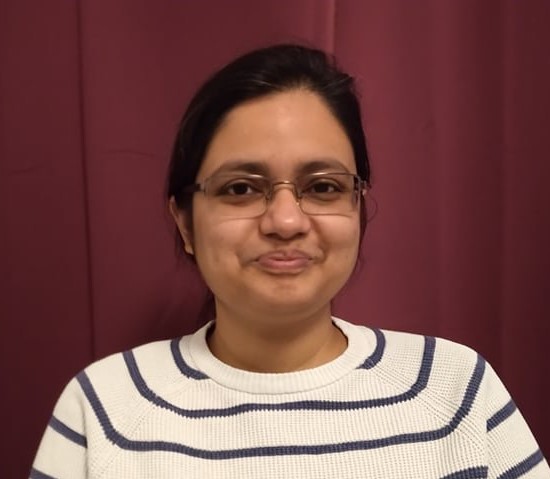 Dr. Trinetra Mukherjee is a microbiologist working on micro-organisms living in extreme environments at the BEEP laboratory at University of Western Brittany. Her project “PIEZOPRO” has begun this January.

[BIENVENÜE Team] Hello Trinetra, how did you become interested in your research area?

[Dr Trinetra Mukherjee] I did my master and PhD in microbiology and became interested in extremophiles. They are micro-organisms that are living comfortably in conditions that are for us humans considered extreme such as high temperature and high pressure. For example, for us it is difficult to live at 50 or 60°C, but they love living at temperatures as high as 80 or 90°C!

My career goal is to work on the physiological characterization of extremophilic microorganisms and towards the development of products derived from them which may have some environmental, industrial and biotechnological potential. During my master and PhD, I had been working on thermophilic organisms i.e. organisms which grow under high temperatures isolated from hot springs of India. I focused on thermophilic bacteria with plant growth promoting traits, carotenoid producers and heat stable enzyme producers.

What will you investigate during the PIEZOPRO project?

I now want to expand my skills, and work on other extremophiles. The marine environment is a very unique environment. There are places where the sea is very cold, with low oxygen, a high salt concentration and a very high pressure. Then there are these hydrothermal vents, regions of the deep sea where chemically-rich, hot, anaerobic water is released into the surrounding cold oceans through cracks in the sea floor something similar to underwater volvanoes. I am particularly interested in microbes living in high hydrostatic pressure conditions in deep sea-hydrothermal vents, the “pieozophiles”. How do they survive in such conditions?

The project uses Thermococcus barophilus as a model piezophile. I will focus on an important aspect, how this organism acquires the necessary amino acids for its survival at high pressure. Aminoacids are a key element in biology, as they are having an important role in cell biological processes such as metabolism. Researchers have seen, that in T. barophilus, high pressure represses many amino acid biosynthetic pathways. So it should mean less survival chances ,unless it develops some mechanism to fulfill this amino acid deficiency. I want to understand which enzymes (proteases) can be helpful in acquiring the necessary amino acids for its survival and I will work at the interface of microbiology, genetics, ‘omics’ and bioinformatics for investigating this phenomenon. It should help us to understand an important aspect of piezophile survival. This is the fundamental aspect of my research project.

PIEZOPRO also have an applied aspect.

The process I am investigating could be very interesting for industries, such as paper, texile, pharmaceutical industry etc. The industry needs enzymes that are capable to carry out several processes at harsher conditions for example at high pressures and high temperatures. Enzymes produced in “normal” conditions, not adapted or tolerant to heat or pressure, are not stable and may be degraded during the process. If we use enzymes from extremophiles, there are more chances that they are more stable when faced to heat or pressure. This is how my project is contributing to the regional strategy for the development of marine biotechnologies.

Do you plan collaborations outside your laboratory?

Yes, I will visit the ELMA group in Grenoble to use their high-tech instruments for around 4 months. In particular, I will purify the enzymes, meaning I will isolate them from the crude cell extracts containing many other unwanted components and I will also characterize them and study their structure, kinetics and stability. I am benefiting from a long-standing collaboration between the BEEP laboratory and the ELMA group. It is an internationally recognized research center in this field and they have been exploring the dynamics of proteins for investigation of biological phenomena such as adaptation of molecules to extreme environments

This is your first long-term position abroad, after a year at the Ruhr University of Bochum (Germany). Why did you chose to come to Brittany?

As I already said, I was looking for expanding my skills on extremophiles and wanted to work on deep-sea vent extremophiles. My now supervisor, Mohamed Jebbar, is one of the top scientists in the field so I contacted him. I was also looking for MSCA fellowships, and so BIENVENÜE was the occasion. I learned about it through the ISBlue website, a graduate school specialised in marine science and technology.

I want to add that the location of my laboratory in Plouzané near the ocean is really nice. It is quite a motivation to see the sea everyday, especially when you are working on what is happening on its floor.

Do you have a recommendation for anyone wanting to learn more about your research ?

If you are interested in piezophiles, I recommend the following videos by my supervisor: an introduction to deep-sea ecosystems  (in English), another video about the piezophiles (in French). The website Astrobioeducation (in French) is also a good resource to learn more.