Marine Landa, a marine microbiologist, working on a bacterium that kills algae 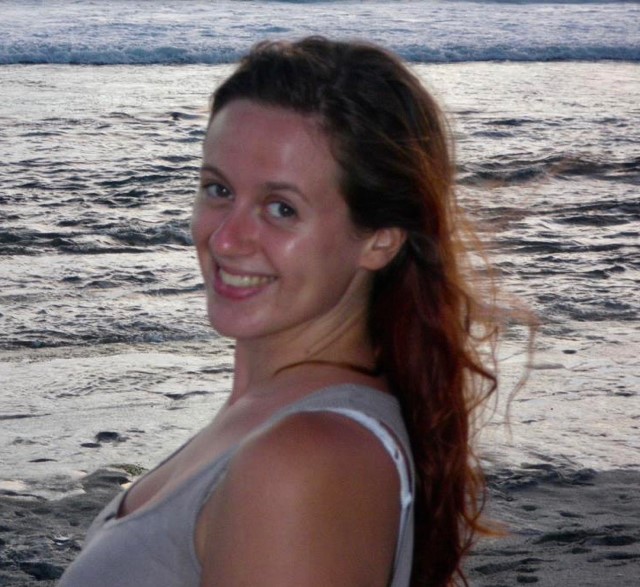 [Team BIENVENÜE] Hello Marine, could you tell us how you became interested in your research topic?

[Dr Marine Landa] As a first-year Master student, I discovered the field of microbial ecology, which studies microbes on Earth: who are they and what do they do? I learnt that they play critical roles in the environment. They are responsible for many chemical transformations that drive the cycles of major elements, such as the carbon cycle, which is intrinsically connected to climate change. I wanted to learn more about these microbes.

During my first postdoctoral job at the University of Georgia (USA), I worked on the interactions between marine bacteria and phytoplankton, studying the chemical compounds they exchange to survive. I investigated which specific genes were expressed by these microbes, as a way to get insight into their behavior. Looking closely at my data, I noticed that a lot of these genes are used by bacteria to analyze their environment, communicate and adjust their behavior based on the external signals they perceive. These are incredibly complex traits for such ancestral organisms.

What does the DISKORDIA project focus on?

This research will investigate the relationship between a bacterium called Kordia and marine phytoplankton (microalgae). The Kordia bacterium is able to kill phytoplankton, which is at the base of the food web. As an “algae killer”, this bacterium could play a very important role in marine ecosystems. My goal is to understand two main aspects: 1) how the bacterium kills phytoplankton and 2) what conditions trigger the attack. I will work in simplified lab conditions and put these organisms together in various situations to close in on the genes involved in the attack.

Why choose the Roscoff Marine Station for this project?

The Station, which celebrates this year its 150th anniversary, has crucial expertise in the cultivation and maintaining of bacterial and microalgal strains, of which it possesses a large collection (about 5,000!). It is also internationally renowned for the quality of its research on marine microbes. It is the perfect environment to conduct the research proposed in the DISKORDIA project.

What are potential outcomes for your research?

Disproportionate algal growth is a recurring problem that strongly impacts the Brittany region. These abnormal algal blooms are enhanced by pollution and the ocean conditions set by climate change. My project doesn’t focus on macroalgae, which cause the infamous green tides. However, phytoplankton can cause similar problems, as some species produce toxins that are harmful to shellfish, and to the humans that consume them. With climate change, these harmful algal blooms are becoming more frequent. There is an entire field of research dedicated to understanding, prevent, and safely manage these blooms. My work will contribute to this global effort to preserve marine ecosystems and the human activities that depend on them.

What material would you recommend to someone interested in this topic?

This clip (in French) from the movie Planet Ocean (2012), directed by Yann Arthus-Bertrand and Michael Pitiot, and this video (in English) by marine biologist Tierney Thys beautifully explain why these marine microbes are so important. The book « Plancton : aux origines du vivant », by Christian Sardet, is an incredible collection of stunning images.