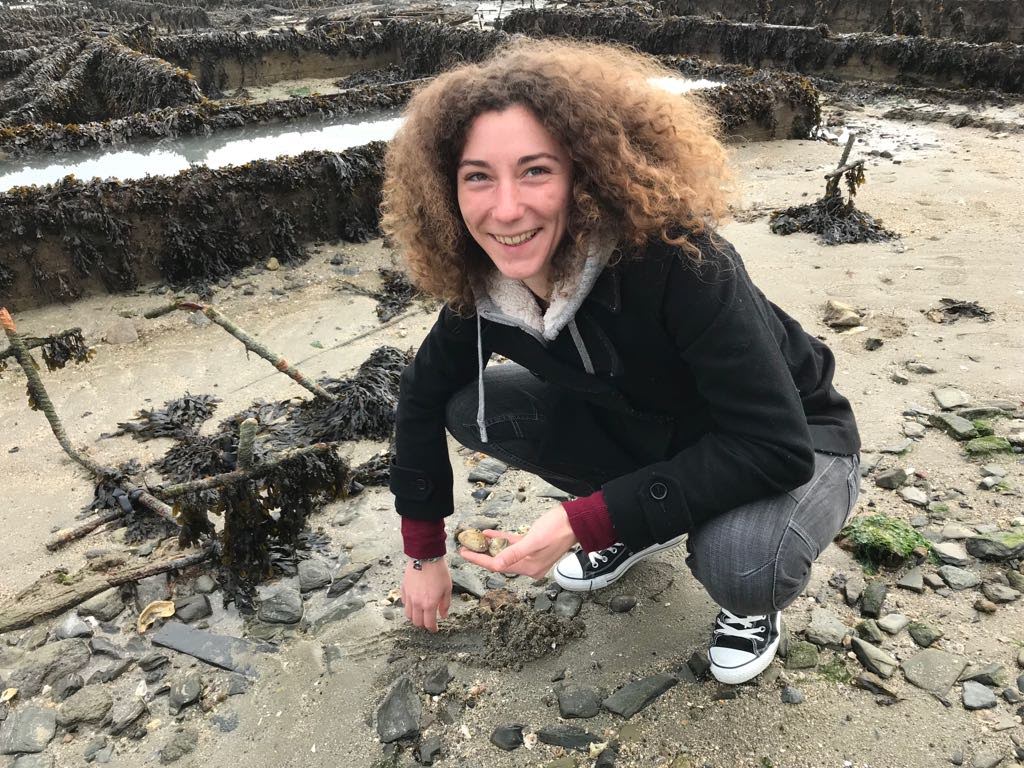 Dr Morgan Smits is a marine biologist working on the immune response capabilities of clams at the LEMAR laboratory at the University of Western Brittany. She started the IMMUCLAM project in January 2022.

[Team BIENVENÜE] Hello Morgan, how have you come to work on your research topic?

[Dr Morgan Smits] During my PhD, I worked on the genetic factors underlying clam immunity. The immune systems of invertebrates are do not have the same mechanisms as vertebrates to counter infection, and we still do not know enough about the role of genetics in pathogen resistance. I was interested in understanding whether there were genetic mechanisms and what might be associated with resistance, and if these genetic factors could be transmitted from one generation to the next.

Beyond the fundamental aspect, a better understanding of these mechanisms in clams is important because this species is highly produced in aquaculture. Currently, there are few ways to control infections on farms, and I would like my research to be used to benefit this aquaculture.

After my thesis in co-supervision between the University of Padova (Italy) and the University of Western Brittany, I continued to work in Italy on several projects, partly on clams. My work has also touched on ecotoxicology, i.e. the responses to pollutants of various species living in the Venetian Lagoon, which is a highly anthropized environment.

What will you work on in the IMMUCLAM project?

For the next two years, I will be working on understanding the immune response of clams to a particular pathogen, triggering the so-called brown ring disease. It is a chronic disease present and identified since the 1990s on the Brittany coast, which affects the growth and reproduction of clams, with episodes of mass mortality. It is one of the factors associated with the significant decline in aquaculture production of this species in recent years.

During experiments with inoculation of the inactive pathogen to clams, I will try to understand if clams can retain a form of immune memory of the pathogen. When it encounters the pathogen afterwards, does this memory have a certain effect and increase protection? If so, how? This mechanism, called “priming”, is somewhat similar to the vaccines developed for vertebrates.

Once this is determined, I would like to investigate the possibility of protection being passed on from parents to the next generation, via so-called epigenetic effects. Very little is known regarding epigenetics in clams, and tracking clam genealogy is notoriously difficult as larvae are formed when gametes shed by males and females encounter in the ocean currents.

Then, my aim will be to develop and test a method based on my results in an aquaculture hatchery. It should be something simple but effective that can benefit the shellfish industry without the need for expensive equipment or infrastructure. In the longer term, I would also like to test this method in different climatic conditions predicted by the IPCC: temperature and salinity level are the main variables.

Why did you choose the LEMAR laboratory to carry out your work?

I contacted Christine Paillard, the CNRS researcher who first identified brown ring disease in clams. Working with her at LEMAR for this project seemed obvious, as she knows the subject perfectly. I am also part of a larger collaborative project, funded by the CNRS for 5 years, between the LEMAR and the University of Padova in Italy. I hope to take advantage of this to return to Italy soon and to learn new techniques.

Would you have a recommendation for a reader who is curious to know more about this topic?

I recommend a book entitled “The Secret Life of Clams: The Mysteries and Magic of Our Favorite Shellfish” by Anthony D. Fredericks (2014). It is an easy to read account of the history, biology, and gastronomy of a wide range of cultivated and harvested bivalves, written by a marine enthusiast. Unfortunately, I don’t know if there is a French translation of this book.